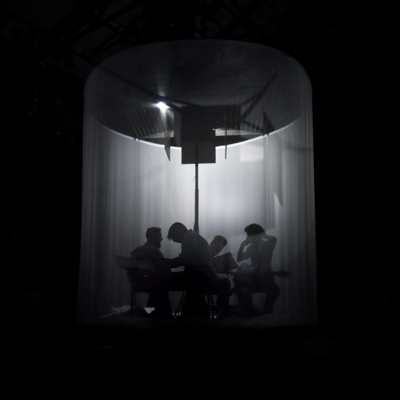 This weekend Zwerm will play two concerts featuring music by Stephen O’Malley and Shiva Feshareki. Both pieces were written specifically for Zwerm, and although a live-stream performance already took place, these performances count as official world premieres! They are part of Zwerm’s program “Our Ears Felt Like Canyons II”.

On Saturday 23/10 Zwerm will play Stephen O’Malley’s work “Avaeken” at the Haus der Kulturen der Welt in Berlin as part of the Sound Of Distance Festival.

The next day they will perform the closing concert of this year’s Transit Festival in Leuven. For this they will perform Shiva Feshareki’s mesmerising “Seismic Wave Ochestra” in addition to O’Malleys “Avaeken”. For this concert Lucas Van Haesbroeck created a specific light-scenography enhancing the immersive listening experience.

In this second instalment of Our Ears Felt Like Canyons, Zwerm will create a new set of works written for a specific listening environment. Where the first edition translated Pierre Schaeffer’s concept of ‘acousmatic listening’ quite literally by ‘hiding’ the musicians behind a curtain, this second edition will displace the acousmatic ‘cut’ by focussing on the physical almost palpable presence of sound in the room. Shiva Feshareki’s Seismic Wave Ochestra, using an ambisonics surround sound setup, is a highly sensory composition that is performed and experienced through a deep listening and physical process, connecting intrinsically to all our senses, our perceptions, and how this is interconnected with our experience of environment and beyond. In contrast, Stephen O’Malley’s new piece Avaeken displays beating phenomena of precise harmonics in the space of the room allowing rhythm and structure to move around the space, exciting the air and bodies present in a physical way, spinning and moving, with calm, contemplative control and vital energy.

Although different in their sonic diffusion, both compositions connect the listening experience with the sense of touch. Enhanced by an adapted staging that carefully shifts between light and darkness, Our Ears Felt Like Canyons II explores different modes of listening using the physical space as an extension of the human body.